Menu
Types of Roof Ventilation Systems
What types of roof ventilation systems are available, and why do they matter? This guide explains different roof vent systems and what they do.
Request A Free Inspection Now!

Types of Roof Ventilation Systems (and Why They Matter)

There are several types of roof ventilation systems, and some are more efficient than others are. When a builder puts together a residential roof or commercial roof, they’re supposed to choose the type that will best serve the space.

These are the most common types of roof ventilation systems in homes and businesses in North Texas:

Here’s a quick run-down on each type of roof ventilation system and how it works. 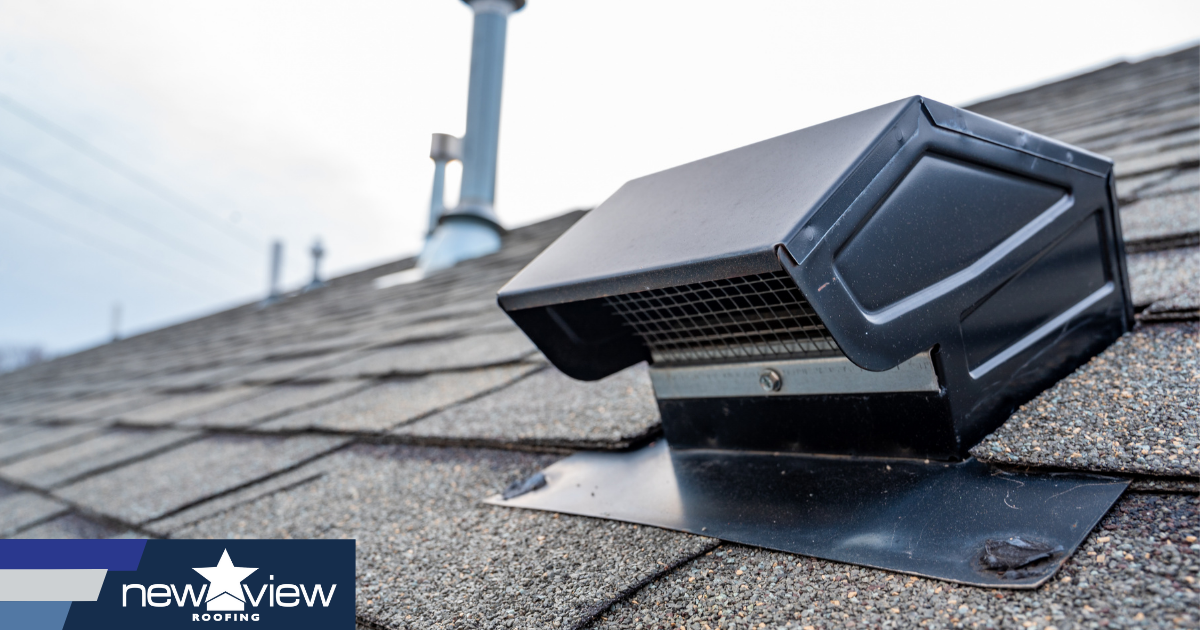 Box vents are among the simplest form of roof ventilation systems. You may also hear them referred to as low profile vents, louvers, flat vents or turtle vents. These vents don’t have any moving parts; they’re most commonly seen in older homes, installed over a hole in the roof or in the fascia. Designed to pull hot air and moisture out of your home, these vents offer a simple way to move air in your attic or the space between your roof deck and the roof.

Usually, box vents are installed very close to a roof’s ridge line. The closer they are, the more hot air and moisture they can allow to escape.

Unfortunately, box vents aren’t as effective as some other types of roof ventilation systems are. If your home or commercial building is equipped with this type of vent system and it doesn’t seem to be working properly, you may need to replace the entire system. Alternatively, you may be able to have a few more box vents installed to increase efficiency. Generally, you need more of these vents to keep your attic ventilated than you would need if you had another type of roof ventilation system.

Primarily for decoration, most cupola vents aren’t even functional. However, some of these vents do function; they just aren’t extremely efficient. Generally, you’ll see cupola vents placed on high roof ridges; they serve as a frame around a roof opening that lets out hot air and moisture. Though these vents are popular with some home styles, they don’t work exceptionally well. For that reason, builders usually put in an additional ventilation system.

Off-ridge vents are very similar to box vents. Like box vents, off-ridge vents are placed near a roof’s ridge. However, they’re not square; they’re rectangular, and usually pretty narrow. Because they are static vents, which means they don’t have a lot of moving parts, they may not provide adequate ventilation in your attic. Even very small buildings need several off-ridge vents to let out enough hot air and moisture. If you have too few of them, moisture can build up in your attic and lead to mold growth and other damage.

Power vents, commonly called PAVs (power attic vents), work by using a motor to suck up hot air and moisture. Often, you see power vents in large commercial buildings, restaurants and factories. They occasionally make an appearance in residential homes, too. Among the most high-tech of all roof ventilation systems, power vents usually feature a built-in thermostat that signals a fan to turn on when temperatures reach a certain level. Some power vents also detect humidity levels so they can turn on when an attic becomes too damp inside.

Usually, power vents are hardwired into a building’s electrical system. However, some power vents are solar-powered, and as such, are connected directly to solar panels. The best part? These vents are designed to be very quiet while they are operating; that way, the noise from the fans won’t bother you or your guests.

Don't Wait Until Damage Gets Worse.

Ridge vents are very common in residential homes. Like many other ventilation types, these are static. That means they don’t have any moving parts. These V-shaped vents cover pre-cut air holes on a roof’s ridgeline. You may not see them because they’re designed to blend into the roof, but they typically run across the entire ridge line.

When combined with soffit vents, ridge vents are incredibly efficient. Their “partnership” enables temperatures to stay the same throughout an entire attic, which is what your roofing materials need to stay in good shape. (Many other roof ventilation types create hot spots and cold spots on a roof’s surface, which can result in faster aging of some of your roofing materials.)

Ridge vents work in conjunction with soffit vents without an external power source; they don’t require wind or electricity. After a soffit vent pulls in cooler, drier air, a ridge vent lets warm, damp air escape. The whole process is very similar to what happens when you open a window downstairs and a window upstairs in your home.

Soffit vents work in conjunction with ridge vents. They’re designed to pull in cooler, drier outside air, and their partners – ridge vents – let warm, moist air escape. This system works exceptionally well because the cool outside air slowly heats up; as it becomes warmer, the air rises and gathers moisture. When the warm air reaches the highest point in your attic, which should be very close to the ridge vent, it escapes.

Wind turbines have plenty of moving parts, but none of them are operated by a motor. These vents rely on the wind alone to make them move. You commonly see wind turbines on commercial buildings because they’re capable of moving a significant amount of air. Unfortunately, though, when the wind isn’t blowing, they aren’t working. In that sense, wind turbines can be as ineffective as box vents often are.

How Can You Tell if Your Roof’s Ventilation System Isn’t Working?

There are a few signs that your roofs ventilation system isn’t working properly. If you notice any of the following symptoms, you may need to talk to a roofing company to find out whether you have the right type of roof ventilation in your home or commercial building:

Do You Need to Talk to an Expert About the Types of Roof Ventilation That Your Home or Building Needs?

If you need to talk to a professional about the types of roof ventilation available, we’re here to help. You can call our office today or get in touch with us online. We’ll be happy to answer your questions and give you the guidance you need.

The professionals at New View are here to make the

ROOF LEAKS! Nobody wants them & nobody needs the

CALL US TODAY AND
GET A FREE INSPECTION